The informal European Council of 7 March 2016 focused on migration, assessing the state of implementation of previously agreed measures. EU leaders stressed the need to fully apply the Schengen Borders Code, thereby ending the ‘wave-through’ policy for migrants, providing humanitarian assistance to Greece and moving forward in the EU’s cooperation with Turkey. The latter point was also the main focus of the informal meeting of the EU Heads of State or Government with Turkish Prime Minister, Ahmet Davutoğlu. Leaders agreed to accelerate the implementation of the EU-Turkey Action Plan and welcomed additional proposals made by Turkey. In particular, the lifting of visa requirements should be brought forward to June 2016 and disbursement of the €3-billion Refugee Facility for Syrians should be speeded up.

1. Informal meeting of the EU Heads of State or Government with Turkey 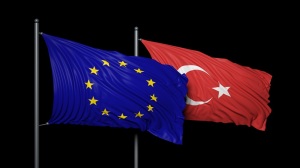 EU Heads of State or Government met on 7 March 2016 with Turkish Prime Minister, Ahmet Davutoğlu, to take stock of EU-Turkey cooperation, in particular of the implementation of the EU-Turkey Action Plan, and to set common priorities for the coming weeks. Prior to the meeting, European Council President Donald Tusk visited Prime Minister Ahmet Davutoğlu and President Recep Tayyip Erdoğan in Ankara. There he advocated ‘a fast and large-scale mechanism to ship back irregular migrants arriving in Greece to Turkey’, as this would ‘break the business model of the smugglers’. At the informal meeting of EU Heads of State or Government with Turkey, leaders agreed that Turkey would take back all migrants apprehended in Turkish waters.

At the previous European Council, on 16 February 2016, EU leaders had already stressed the importance of the ‘full and speedy implementation of the EU-Turkey Action Plan’. At that time, they acknowledged that some progress had been made, but called for more decisive efforts on the Turkish side to ensure its effective implementation. This time, leaders acknowledged ‘good implementation of the Joint Action Plan on migration’, but ‘the flow of migrants passing from Turkey to Greece remains much too high and needs to be brought down significantly.’

After lengthy discussions, EU leaders welcomed ‘bold proposals’ by Prime Minister Ahmet Davutoğlu, to complement the existing EU-Turkey Action Plan, agreed at the meeting of Heads of State or Government with Turkey on 29 November 2015, with additional elements. These include:

The decision on other Turkish requests, such as an additional €3 billion, on top of the existing €3 billion for the refugee facility for Turkey, and the acceleration of talks on Turkish membership of the EU, were postponed. The European Council President, Donald Tusk, was tasked to ‘work out the details with the Turkish side before the [17-18] March [2016] European Council.’

EU leaders also discussed the situation of the media in Turkey with the Turkish Prime Minister. Prior to the meeting with Heads of State or Government, Turkish Prime Minister Ahmet Davutoğlu met with the European Parliament President, Martin Schulz, discussing among other things the situation of the freedom of the press in Turkey. After the meeting of EU leaders with Turkish Prime Minister Ahmet Davutoğlu, President Schulz outlined the European Parliament’s role in, and views on, the ongoing process. He argued that one should not link the Turkish negotiations on accession to the EU with Turkey’s role in solving the refugee crisis, and called on the Turkish government to restart the peace process with the Kurds.

Download this briefing on ‘Outcome of informal European Council of 7 March 2016 and the informal meeting of the EU Heads of State or Government with Turkey‘ in PDF.

Immediately after their meeting with Turkish Prime Minister Ahmet Davutoğlu, EU Heads of State or Government convened for an informal European Council meeting to discuss a common European approach to the migration crisis. Prior to the meeting, the European Council President, Donald Tusk, spoke of the emergence of a European consensus, for the first time, around a comprehensive strategy regarding the migration crisis. The main decisions at the informal European Council revolved around restoring the Schengen area, cooperation with Turkey and providing (humanitarian) assistance to Greece.

Following the mandate from the February 2016 European Council ‘to restore the normal functioning of the Schengen area’, the European Commission published a communication, ‘Back to Schengen – A roadmap’ (see table 1) on 4 March 2016. In this document, the Commission stressed the need for a ‘coordinated European approach to temporary border controls within the framework of the Schengen rules instead of the current patchwork of unilateral decisions.’ The Commission also highlighted protection of the external borders, and the particular role for Greece and the need to support Greece (see below). It also called for the European Border and Coast Guard to be made fully operational by November 2016 at the latest.

At the 7 March 2016 informal European Council, these messages were supported by EU leaders, who called for all the elements of the Commission roadmap to be taken forward as a matter of priority. They also repeated their message from the recent European Council, of 18-19 February 2016, stressing the need to putting an end to the ‘wave-through’ approach, whereby potential asylum-seekers are allowed to travel on to the Member State of their choice.

The Commission has recently estimated that the potential cost of non-Schengen (namely a full re‑establishment of border controls within the Schengen area) would involve direct costs of between €5 and €18 billion annually.

EU leaders also further discussed the EU’s cooperation with Turkey (see above). The European Council called, in particular, for the implementation of the existing resettlement commitments and to continue work on a credible voluntary humanitarian admission scheme with Turkey. Heads of State or Government called for ensuring comprehensive, large scale and fast-track returns to Turkey of all irregular migrants not in need of international protection. They also underlined the importance of the NATO activity in the Aegean Sea, and called on all NATO members to support it actively.

Due to the closure of the borders on the Western Balkans route, tens of thousands of migrants are stranded in Greece, turning the country into what the country’s Prime Minister and subsequently President Donald Tusk have called ‘a warehouse of souls’. EU leaders confirmed European Council President Donald Tusk’s earlier promise that ‘the European Union will not leave Greece alone’, and expressed their conviction to ‘stand by Greece in this difficult situation’ as ‘this is a collective EU responsibility requiring fast and efficient mobilisation of all available EU means and resources and of Member States contributions.’

EU leaders welcomed the European Commission’s proposal for an ‘Emergency Assistance Instrument’, following the European Council’s conclusions of 18-19 February 2016, in which the Commission was tasked with making proposals to develop the EU’s capacity to provide humanitarian assistance internally, in cooperation with organisations such as the UN Refugee Agency. This proposal for a Council Regulation is based on Article 122 of the Treaty on the Functioning of the European Union (TFEU), and would enable the EU to provide emergency support in response to exceptional crises or disasters within EU Member States, which give rise to severe humanitarian consequences, including helping Member States cope with large numbers of refugees.

The European Council asked Member States to provide more places for relocation and to accelerate the implementation of relocation. In order to support Greece with relocation, managing the external border, and the proper functioning of the hotspots, EU leaders called for further assistance to Greece. Frontex and the European Asylum Support Office (EASO) will launch additional calls for national guest officers, and Member States are asked to ‘respond rapidly and in full’.

Table 1: Deadlines in the Commission communication ‘Back to Schengen – A roadmap’

The European Council Oversight Unit within the European Parliamentary Research Service (EPRS)monitors and analyses the delivery of the European Council in respect of the commitments made in the conclusions of its meetings, as well as its various responsibilities either in law or on the basis of intergovernmental agreements.
View all posts by ECOS »
« Foreign fighters – Member State responses and EU action
Climate: High priority for low carbon »