STOA Annual Lecture 2017: Media in the age of artificial intelligence 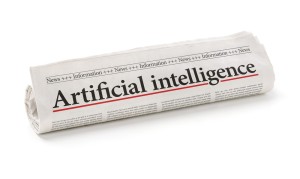 This year, STOA’s Annual Lecture will focus upon how media and other information is managed and distributed in the age of artificial intelligence (AI). This includes how AI can be used to disseminate quality information as well as misinformation, as well as how algorithms can be used to counteract fake news.

What are algorithms? At their most simple, they are sets of rules and instructions, usually expressed in computer code, followed in order to solve a problem. For example, applying rules to historical data about people to decide which information to send to them. Algorithms have been around for a long time – longer than AI, and even longer than computers. However, as they become both ubiquitous and effective, they also become increasingly important in our lives, supporting decisions in areas ranging from credit and healthcare to human welfare and employment.

On the one hand, algorithmic decision-making could be considered more objective than the human equivalent. However, advanced AI algorithms are very complicated, and discrimination can emerge from biases that may be embedded in their code, or in the data used to train them, or acquired through learning. For example, groups of AI agents that control prices on websites might learn to fix them without having been instructed to do so. There is also a question of transparency. Since AI algorithms process so much data and draw on such a wide range of complex techniques, it may be difficult or even impossible for humans to understand the reasons behind a particular decision. This opacity is reinforced by the economic cost of providing transparency, as well as conflicts with other requirements, such as the protection of personal data. Algorithms affect most people in their daily lives, but they have little hope of understanding how they work, or how they could work against them.

The Annual Lecture 2017, chaired by STOA Chair Eva Kaili (S&D, Greece), will investigate the challenges associated with the design and application of AI algorithms in the media domain, presenting an opportunity to learn more about these questions and to participate in a debate with key experts in the subject. The event will open with speeches by the STOA Panel Chair and Carlos Moedas, European Commissioner for Research, Science & Innovation. A keynote lecture follows by Nello Cristianini, Professor of Artificial Intelligence at the University of Bristol, who will explain how AI and algorithms can manage information flows, and a panel discussion to explore the phenomenon of information in the age of AI from the perspective of academics, internet giants, publishers, and media houses.

The panel, moderated by David Wheeldon (Sky), will include presentations from Michail Bletsas (MIT Media Lab), Michiel Kolman (Elsevier and International Publishers Association), Andeas Vlachos (University of Sheffield), Jon Steinberg (Google) and Richard Allan (Facebook). The panel will also include a case study on algorithms in action presented by Yannis Kliafas (Athens Technology Center) and Wilfried Runde (Deutsche Welle). The public debate will provide the panellists with an opportunity to discuss the issues raised during the Lecture, and for members of the public to ask questions.

Finally, the Lecture will also be an opportunity to mark STOA’s 30th anniversary by launching a new European Parliament initiative: The European Science-Media Hub.

Interested? Register for the lecture and join the debate.

The Scientific Foresight Unit (STOA) carries out interdisciplinary research and provides strategic advice in the field of science and technology options assessment and scientific foresight. It undertakes in-depth studies and organises workshops on developments in these fields, and it hosts the European Science-Media Hub (ESMH), a platform to promote networking, training and knowledge sharing between the EP, the scientific community and the media. All this work is carried out under the guidance of the Panel for the Future of Science and Technology (STOA), composed of 27 MEPs nominated by 11 EP Committees. The STOA Panel forms an integral part of the structure of the EP.
View all posts by Scientific Foresight (STOA) »
« How the EU budget is spent: Copernicus – The EU’s Earth observation and monitoring programme
New priorities for EU–Africa cooperation [Plenary Podcast] »