What if ‘nudging’ good habits could make us healthier? [Scientific and Technology Podcast] 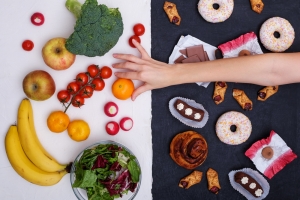 The link between high consumption of trans fats, sugar and salt, found in large amounts in processed food, and an increased risk of cardiovascular diseases (CVDs), type 2 diabetes and various cancers is well established. In the current food market, calorie-rich, processed food, wrapped with ambiguous labels, is readily available, cheap and heavily promoted. But what if consumers could be prompted to make healthier food choices?

Recently, the United Kingdom introduced a tax on sugar-sweetened beverages (SSBs). The idea behind this levy is that manufacturers will reduce the sugar content of their products and that consumption of beverages high in sugar will fall due to their added costs. However, the extent to which such levies are effective is debatable. While there is ample evidence to suggest that food taxes lead to a decrease in consumption of targeted foods, the evidence as to whether this leads to a fall in the development of chronic disease is less convincing.

In the absence of an EU strategy, prior to the UK´s adoption of a sugar tax, Finland, Hungary, France and Denmark had also implemented food tax strategies. This was done in an attempt to adhere to the WHO’s Global Action Plan for the Prevention and Control of Non-communicable Diseases 2013-2020, which aims to promote healthy eating through fiscal policy. The Danish and Finnish experiences highlighted some of the issues that can arise from punitive fiscal strategies. In both cases the taxes have since been abolished.

Studies comparing punitive policies with ´reward´ schemes have shown that subsidies granted to companies for the production of wholesome food also significantly alter dietary consumption. Price decreases due to subsidies for healthy food saw an increase in the consumption of healthier products, and clearly affected the overall improvement of consumers’ diets. The same studies also concluded that fiscal policy should not be applied in isolation, since promotion, advertising and nutrition education could also accentuate the dietary changes achieved through subsidies.

Developments in behavioural economics, a method of economic analysis that applies psychological insights into human behaviour to explain decision-making, have made it possible to better understand what kind of messages the public responds to and what kind of ‘nudges’ can be applied to influence the decisions people make when selecting products and adhering to certain dietary choices. Subsidies, therefore, are not only effective as fiscal policies, but could also act as a means of encouraging large food and beverage companies to join in with wider efforts being made to sway the public towards making healthier choices.

A handful of behavioural science insights provide an understanding of why it is challenging to make healthy choices in the current environment. These, in turn, can help to inform the design of health interventions shaped by the public sector for potential implementation by the private sector, which has more resources to spend on promotion than governments and NGOs. Large corporations also have broader experience in marketing strategies and tend to create more memorable media messages.

A key finding from psychological studies is that interventions promoting healthy behaviour are generally more effective than those condemning unhealthy behaviour. This is likely to be because positive messages, such as those concerning consumption of fruit and vegetables, are more readily received than negative ones on, for example, sugar consumption. Promotion of enticing, government-approved messages for healthy foods is something food and beverage companies, both large and small, could be more willing to undertake with a monetary incentive.

Insights into effective communication have gone further. Psychologists have separated human thought processing into two systems. Nobel Prize winner Daniel Kahneman calls them ‘System 1’, which is fast and impulsive, and ‘System 2’, which is slower and reflective, used when processing complex inputs such as numerical information. Information such as displays of nutrients on packages, presented in milligrams and grams, may often go ignored, as this requires time and effort to process. Simpler ways of transmitting information, directed towards System 1, such as the traffic light system adopted in the UK, or pictograms, could be more effective ways of profiling food, and thereby guiding the public in making healthier food choices. In April 2016, the European Parliament voted down the concept of nutrient profiles on food labels because of the serious and persistent problems in its implementation. The REFIT evaluation on nutrition and health claims is revisiting the issue, in the hope that a comprehensive nutrient profiling system could be determined. Incentives for clear messaging based on strict guidelines on what can be labelled as healthy may deter companies from printing misleading labels. The risk of misleading information nevertheless remains, given that food companies have the option of reformulation in response to food taxes, but that lowering the excessive amount of one ingredient does not necessarily result in a healthier product. Another concern when it comes to labelling is the ‘compensation effect’. This was seen, for example, in one study which found that people ate more M&M sweets when these were labelled as ‘low fat’.

The human tendency to stick to default options, which are habitual and automatic, known as the ‘status quo bias’, is also a relevant behavioural science insight. Currently, many pre-prepared convenience food options come in calorie-dense portions, which results in excessive intake. By taking advantage of the status quo bias, policies implemented by food and beverage producers could perhaps also help reduce calorie consumption.

What does this mean for European policy-making?

Businesses are becoming increasingly willing to shift towards production of food products that contribute more to a healthy diet, as consumer demand for them continues to rise. It therefore seems to be the right time for the public sector to formulate policy strategies that will boost this change. Reports such as the Access to Nutrition Index will be required to assess which food and beverage companies have stepped up their efforts to encourage better diets, and to what extent. Likewise, actions taken by EU Member State governments should be evaluated in order to determine what measures work best and can potentially be applied more widely. Evidence-based guidance will enable planning and support at the EU level.

While a fiscal policy that supports subsidies could be promising, and would eradicate concerns around competitive disadvantages of companies in countries that have introduced food taxes, it is important to assess how subsidies could be distributed amongst businesses. For example, while the top 10 multinationals produce more than 50 % of all soft drinks, the top 10 packaged-food companies supply only 15 % of worldwide sales. Therefore, it is important to work with SMEs as well as big corporations to guide them along the right path.

Food labelling is already regulated within the EU. More comprehensive rules are nonetheless needed. Companies are able to make health claims on the absence of unhealthy ingredients or high amounts of specific ingredients that offer health benefits. Some products, however, may not entirely justify their ‘healthy’ image. A clear and simple labelling system should be established, enabling consumers to compare products according to their health benefits. Governments have taken the lead in changing the public’s perception of smoking and drink driving, and many hope that eating habits could be remoulded in much the same way. With the right guidance, and appropriate marketing techniques, food and beverage companies will be better positioned to spread messages to this effect in the future.

Read this At a glance on ‘What if ‘nudging’ good habits could make us healthier?‘ on the Think Tank pages of the European Parliament.

The Scientific Foresight Unit (STOA) carries out interdisciplinary research and provides strategic advice in the field of science and technology options assessment and scientific foresight. It undertakes in-depth studies and organises workshops on developments in these fields, and it hosts the European Science-Media Hub (ESMH), a platform to promote networking, training and knowledge sharing between the EP, the scientific community and the media. All this work is carried out under the guidance of the Panel for the Future of Science and Technology (STOA), composed of 27 MEPs nominated by 11 EP Committees. The STOA Panel forms an integral part of the structure of the EP.
View all posts by Scientific Foresight (STOA) »
« Golden visa, free ports and letterbox companies from a money laundering and tax evasion perspective
European Parliament Plenary Session, October II 2018 »