The pandemic has led to a situation where the healthcare systems of European regions have been heavily over‑burdened, with more patients to treat than they have capacity for. Several healthcare projects between cross-border regions, funded by Interreg programmes, have contributed to the fight against the virus, in particular in regions of Germany, France, Italy and Spain, some of the worst affected EU Member States.

Contribution of Interreg to health care 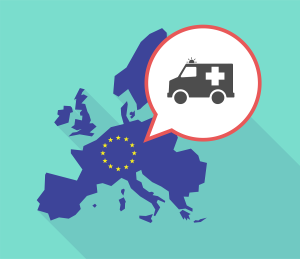 As part of EU cohesion policy for 30 years, European Territorial Cooperation (ETC), better known as Interreg, has played a significant role in facilitating cooperation between European regions through project funding. It provides a framework for the implementation of joint actions and policy exchanges between national, regional and local actors from different Member States. More concretely, the Interreg programme aims to enhance regions’ capacity to find shared solutions to common challenges in a wide-range of fields, such as health, environment, transport, research and sustainable energy.

In the current programming period (2014-2020 – fifth period of Interreg), Interreg V has 79 cooperation programmes, mainly targeting cross-border cooperation (Interreg A), but also transnational (Interreg B) and inter-regional cooperation (Interreg C). One aim of the programme addresses cross-border cooperation in the field of health aiming, amongst other things, to facilitate the cross-border mobility of patients and health professionals, and to develop access to high quality healthcare through the use of common equipment, shared services and joint facilities in cross-border areas. The Interreg programme is funded by the European Regional Development Fund (ERDF) and has a budget of €10.1 billion invested in a range of cooperation programmes for the 2014-2020 programming period.

Article 174 of the Treaty on the Functioning of the European Union (TFEU) states that, in order to promote its overall harmonious development, the Union shall develop and pursue its actions leading to the strengthening of its economic, social and territorial cohesion. The article also stipulates that particular attention shall be paid to rural areas affected by industrial transition, and regions which suffer from severe and permanent natural or demographic handicaps, such as cross-border regions. Article 168 TFEU stipulates that EU action, which shall complement national policies, shall be directed towards improving public health and combat serious cross-border threats to health. The article also stipulates that the EU shall encourage cooperation between Member States regarding public health, and in particular between the Member States to improve the complementarity of their health services in cross-border areas.

The Covid-19 pandemic has led to a situation where the healthcare systems of the Member States and their regions have been heavily burdened, with more patients to treat than they have capacity for. In particular, some border regions in northern Italy, south-western Germany and north-western France were significantly affected by the pandemic. The European Commission highlighted that many border regions already have both a history of, and the structures for, cooperation in health, which they should fully exploit in the spirit of European solidarity. On 3 April 2020, it recommended that Member States, regional and local authorities should use the full capacity of the flexibility offered to the Interreg programmes to address the pandemic. Several Interreg V projects have contributed to cross-border regions’ fight against the Covid-19 pandemic all over Europe, for example through mobility of intensive care patients and healthcare professionals, and the development of medical equipment.

Many Interreg projects in the field of health can be found in the keep.eu database.

As part of the cohesion policy legislative package for 2014-2020, Parliament adopted its position on specific provisions for support from the ERDF to the European territorial cooperation goal on 14 March 2012. Regarding cross-border cooperation, Parliament amended the European Commission’s proposal aiming to tackle common challenges identified jointly in the border regions, in particular in relation to information and communication technology (ICT) connectivity and transport infrastructure, declining industries. It also promoted the idea of exploiting the untapped growth potential in border areas, such as development of cross-border research and innovation facilities and clusters, cooperation among education providers, including universities, and between health centres.

Regarding the proposed 2021-2027 Common Provision Rules, the European Parliament adopted a first-reading position in March 2019, stating that the resources for cross-border projects under Interreg (European Regional Development Fund) should amount to €11.3 billion in 2018 prices, or 3 % of the total cohesion resources (instead of the 2.5 % proposed by the Commission). Parliament also adopted a first-reading position on the proposal for a regulation on specific provisions for Interreg, supported by the ERDF and external financing instruments, on 26 March 2019. It called for some amendments regarding cross-border cooperation, in particular regarding people-to-people and small-scale projects, which are important for, among other things, eliminating border and cross-border obstacles. It also called for the ERDF, and where applicable, the external financing instruments of the EU to contribute to a more social Europe (policy objective 4 of the ERDF) by delivering on the principles of European Pillar of Social Rights (EPSR), which includes European citizens’ rights to timely access to affordable, preventive and curative healthcare of good quality.

See also our EPRS briefing, ‘Exceptional coronavirus support measures of benefit to EU regions’, of May 2020.

Read this ‘at a glance’ on ‘Cross-border regional healthcare cooperation to combat the coronavirus pandemic‘ in the Think Tank pages of the European Parliament.

« Coronavirus and prisons in the EU: Member-State measures to reduce spread of the virus
Plenary round-up – Brussels, June 2020 »