Protecting EU common values within the Member States: An overview of monitoring, prevention and enforcement mechanisms at EU level

Article 2 of the Treaty on European Union (TEU) lays down the founding values of the European Union, referring to ‘human dignity, freedom, democracy, equality, the rule of law and respect for human rights, including the rights of persons belonging to minorities’. The provision defines the constitutional core of the European Union through a set of values that are shared by the Member States. The EU’s founding values are binding not only on the EU institutions, but also on the Member States, as both candidate countries and Member States are required to comply with the EU’s founding values by virtue of the Treaties (Articles 7 and 49 TEU) and certain consequences are attached to situations where such values are not observed (for example, the impossibility to accede to the EU or the possibility of sanctions).

EU primary law provides for various mechanisms that can and have been used to monitor, prevent breaches of, or enforce EU values within the Member States, namely, the two procedures provided for under Article 7 TEU (preventive and sanctions), infringement procedures (Articles 258-259 of the Treaty on the Functioning of the European Union − TFEU) and preliminary references (Article 267 TFEU). While the first mechanisms are to be used only in cases of systemic threats or breaches of EU values and are characterised by the leading role assumed by the Council of the European Union (Council, hereafter) and the European Council, the two other mechanisms can be described as judicial tools with regard to which the European Court of Justice assumes a major role.

Although the Treaties already provide for a range of tools that can be deployed to protect EU values within Member States, since 2007 the EU institutions have established a wide range of other mechanisms to monitor and prevent breaches of EU values in Member States. Between 2012 and 2014, the EU institutions created three monitoring and preventive tools to that end. The Commission launched its Justice Scoreboard in 2013, aimed at measuring the efficiency, quality and independence of the Member States’ justice systems, and feeding into the European Semester process for economic governance. A year later, in 2014, the European Commission established its rule of law framework, a preventive mechanism aimed at addressing threats to EU values before Article 7 TEU procedures are launched, and finally the Council decided to set up its annual dialogues on the rule of law.

However, these new mechanisms have not exhausted the discussion on the adequacy of the EU toolbox to address Member States’ deficiencies regarding EU values. In October 2016, Parliament called on the Commission to establish an EU pact on democracy, the rule of law and fundamental rights, to monitor compliance with those values in the Member States. Although the Commission did not take up the proposal to start with, in 2019, it decided to take stock of experience gained from applying the existing mechanisms to different Member States and launched a broad debate on how to strengthen the EU mechanisms to address common values deficiencies in the Member States. As a result, the Commission decided to establish a Rule of Law Review Cycle (2019), a monitoring tool that has yet to bear fruit, with the European Commission issuing its first rule of law report in September 2020. In a similar vein, as part of the 2021-2027 multiannual financial framework (MFF) legislative package, the Commission put forward a proposal for a regulation establishing rule of law conditionality, allowing EU institutions to withdraw or suspend EU funds for Member States with systemic deficiencies in that regard. At the time of writing, the proposal is still being considered by the co-legislators, although the introduction of rule of law conditionality was announced after the European Council special meeting of 17-21 July 2020 at which a political agreement was reached on the 2021-2027 MFF.

Taking these elements into account, this study aims to analyse the existing and proposed mechanisms for monitoring, prevention and enforcement of EU values within the Member States. The focus will be on their scope of application, the main procedural features and their effectiveness in addressing shortcomings in Member States as regards compliance with the common EU values enshrined in Article 2 TEU.

Read the complete ‘in-depth analysis’ on ‘Protecting EU common values within the Member States: An overview of monitoring, prevention and enforcement mechanisms at EU level‘ in the Think Tank pages of the European Parliament.

EU pact on democracy, the rule of law and fundamental rights (DRF) 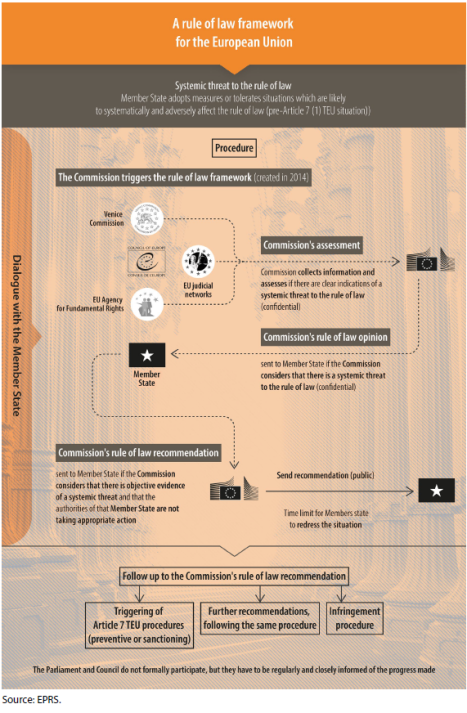 The Commission’s rule of law framework