How the EU budget is spent: Instrument for Nuclear Safety Cooperation

In the early 1990s, following the fall of the Berlin Wall and the disintegration of the USSR, the EU began to provide support via its TACIS programme for structural adjustment and reform in 11 post-Soviet and post-communist countries. One form of support was for countries grappling with a Soviet-era nuclear legacy to help them lift their safety and technical standards to Western European levels – a source of particular concern in the wake of the 1986 Chernobyl disaster. That support ultimately paved the way for a formal EU external policy on nuclear safety cooperation around the world, financed by an Instrument for Nuclear Safety Cooperation (INSC). With a 2014-2020 budget of €225.3 million (0.02 % of the 2014-2020 Multiannual Financial Framework), the current INSC promotes a high level of nuclear safety, radiation protection, and safeguards for nuclear material outside the EU, from Argentina to Mongolia.

Funds in the 2014-2020 INSC are allocated in line with annual action programmes (AAP) based on two multiannual indicative programmes, the first of which covers the period from 2014 to 2017. These in turn reflect an INSC strategy paper, which takes as its starting point specific measures set out in Article 3 of the INSC Regulation for each of the three objectives: (1) promoting a culture of nuclear safety and radiation protection standards; (2) supporting responsible and safe management of spent fuel and radioactive waste; and (3) establishing effective safeguards for nuclear material in third countries.

According to a 2016 Commission report on the implementation of the EU’s instruments for financing external actions in 2015, the main achievements of the INSC in 2015 include ongoing work on environmental problems resulting from the legacy of former uranium mining activities in central Asia; support for nuclear regulatory authorities in Armenia, Belarus, China, Ukraine and Vietnam; support for regulatory authorities in Turkey and Iran; and radioactive waste management activities in central Asia and Ukraine.

Read the complete briefing on ‘Instrument for Nuclear Safety Cooperation’ on the Think Tank pages of the European Parliament. 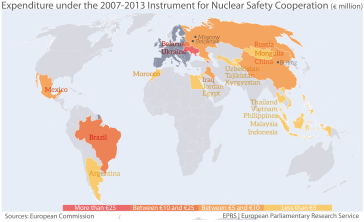 « Global Trendometer: Essays on medium- and long-term global trends – Summer 2017
The State of the Union [What Think Tanks are thinking] »