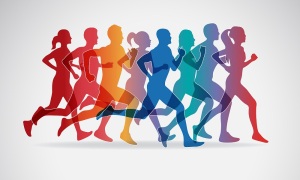 Sport has a growing impact both on the European Union (EU) economy and on society as a whole. Over 7 million people work in sport-related jobs, and sport-related goods and services amount to nearly 3 % of total EU gross value added.

It was not until 2009, with the entry into force of the Lisbon Treaty, that the Union received a clear mandate to build up and implement an EU-coordinated sports policy supported by a specific budget, and to develop cooperation with international bodies in the area of sport.

However, EU competence in sport is limited and only allows the EU to support, coordinate or complement sports policy measures taken by national governments. This rules out the adoption of legislation or any other legally binding measure. The EU has therefore opted to act via ‘soft’ policy tools, such as guidelines, recommendations and – most importantly – funding, to support its sport-related objectives.

Over the years, the EU has been actively involved in tackling transnational issues such as doping, match-fixing and lack of physical activity. In recent years, various health-related EU initiatives have grown increasingly popular. In 2018, the European Week of Sport attracted nearly 14 million people to over 50 000 events across Europe, with the Western Balkans and the countries from the Eastern Partnership joining the initiative in 2019. The #BeActive Night, a new feature first introduced in 2018, will continue encouraging participants to discover and try the different sports activities available in their area.

None of this would have been possible without the introduction of a specific budget for sport, in which the European Parliament played a key role. As the popularity of sport-related initiatives grows, so do the Commission’s plans and ambitions for the broader role of sport in society. The executive’s proposal for the 2021-2027 Erasmus programme confirms this ambition. Accordingly, the amount available for Erasmus would be doubled, to reach €30 billion, with €550 million dedicated to sport. 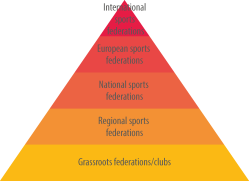 The pyramid structure of sport 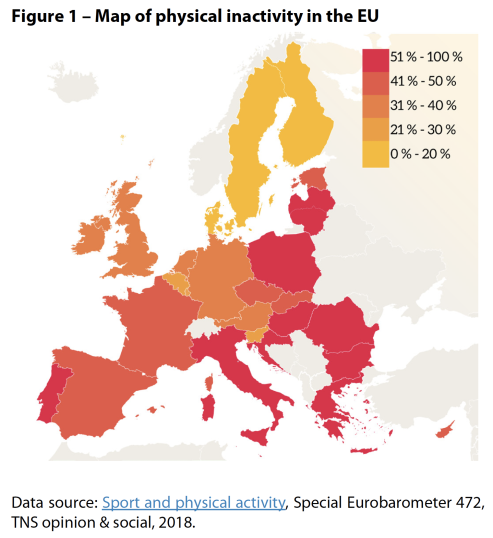 Map of physical inactivity in the EU

« International Day of Peace: EU contribution to peace in the world
Overview of the parliamentary hearings »