On 30 December 2020, the European Union (EU) and the United Kingdom (UK) signed a Trade and Cooperation Agreement (TCA), concluding nearly ten months of negotiations. Since 1 January 2021, the TCA has been provisionally applied. Should the European Parliament agree to consent to the Council decision concluding the agreement, the TCA will constitute the cornerstone for a new future relationship between the EU and the UK, as it creates a single framework covering a wide range of areas of economic activity and cooperation, and allows for the broadening of those areas.

A large part of the TCA is made up of chapters touching upon economic activity. First and foremost, these envisage that trade in goods will take place under conditions of zero tariffs and quotas, although trade will now be subject to non-tariff barriers such as rules of origin. On digital trade, the TCA safeguards the primacy of data protection and privacy rules, and provides for a ban on customs duties on electronic transmission, as well as on data localisation requirements. The energy chapters grant access to wholesale markets and provide a framework for developing rules on the management of electricity and gas interconnectors; key principles of EU law will continue to apply. In air and road transport, the TCA allows operators to provide services from points in the EU to points in the UK and vice versa, with a limited number of road haulage operations allowed in each other’s territories. Regarding the movement of people, the TCA grants visa-free short-term tourism, and facilitates temporary migration for business purposes; it also provides for social security coordination for pensions, among other things. On fisheries, the TCA provides for a gradual shift of quota shares from the EU to the UK, worth a quarter of the EU’s catch value in UK waters, beyond which they can only be changed by mutual consent. The TCA also provides for compensatory measures in case of a reduction in access to waters, for example through tariffs. Finally, the negotiations dealt only marginally with financial services.

The level playing field provisions constrain the parties to maintain at least the same level of standards as prevailed on 1 January 2021, in the social, labour, and environmental areas (non-regression), and establish rebalancing mechanisms whenever significant divergences in these areas lead to ‘material impacts’ on trade or investment. These non-regression and rebalancing principles were a major source of divergence during the negotiations, and were strongly supported by the EU.

In a separate part, the TCA provides for continued cooperation in law enforcement and judicial cooperation in criminal matters. Among other things, it provides for the exchange of data between the parties – but without granting the UK direct access to the EU’s databases and information systems – and introduces a new surrender mechanism for those accused or convicted of crimes. The UK will also continue to cooperate with the EU agencies in this field (Europol and Eurojust), under the third-country model. The TCA also sets the general framework for UK participation in EU programmes. Based on draft protocols, still to be adopted, the UK is expected to participate in a number of programmes in the areas of research, innovation and space, including Horizon Europe. The UK will participate as a third country, subject to making a financial contribution.

The core governance component of the TCA is the Partnership Council, co-chaired by a member of the European Commission and of the UK government, and assisted by 19 specialised committees; it will oversee the attainment of the TCA objectives, and supervise its implementation and application. The TCA also provides a horizontal, as well as field-specific, dispute-settlement mechanisms, which involve decisions by arbitration tribunals or panels of experts. The format of a single agreement, coupled with a horizontal dispute-settlement mechanism linking various fields within the TCA, was another major source of divergence during the negotiations, with the EU strongly supporting this single agreement approach.

Read this complete ‘in-depth analysis’ on ‘EU-UK Trade and Cooperation Agreement: An analytical overview‘ in the Think Tank pages of the European Parliament.

Timeline of the negotiations 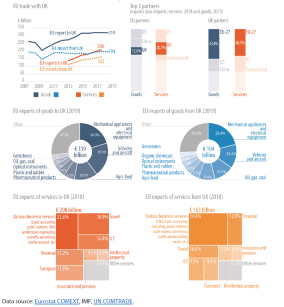 Trade in goods and services between the EU and the UK

« Policing in national parliaments: How parliaments organise their security
Critical raw materials for the EU: Enablers of the green and digital recovery [Policy Podcast] »

4 thoughts on “EU-UK Trade and Cooperation Agreement: An analytical overview”