The Congress is the legislative branch of the US system of government and is divided into two chambers: the House of Representatives (lower chamber) and the Senate (upper chamber). The formal powers of the Congress are set out in Article 1 of the US Constitution, and include making laws, collecting revenue, borrowing and spending money, declaring war, making treaties with foreign nations, and overseeing the executive branch.

Elections to the US Congress occur in November every second year, with the Congress convening the following January. The current, 116th, Congress was elected in November 2018 and was convened in January 2019.

The US has a long-standing two-party system, which means that nearly all members of Congress belong to either the Republican or Democratic parties, while independent members (if any) generally align or sit with one of the two main parties. At the most recent simultaneous US Congressional and Presidential elections, back in November 2016, the Republicans won majorities in both houses of Congress, as well as winning the White House. However, the Democrats gained a majority in the House of Representatives at the November 2018 mid-term elections.

This EPRS Briefing is designed to provide key facts and figures about the US Congress as an institution, including relevant comparisons with the European Parliament (EP). The back page contains a map showing the location of the various Congressional buildings on Capitol Hill, home to the Congress in Washington DC. 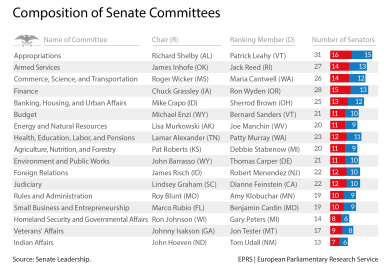 History of party balance in the US Congress 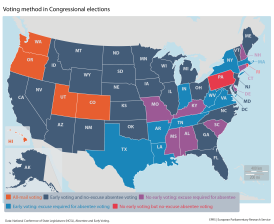 Trends in turnout in US Congressional and EP elections

Religious affiliation of Members of Congress

Ethnic origin of Members of Congress

Women in the US Congress and European Parliament

Age of Members of Congress

« Recent migration flows to the EU
Global Trends to 2030: Hard and soft power in a changing world »